An 11-year-old Salt Lake boy is preparing to compete with others from around the world, but it has nothing to do with the Olympics. Doug Brian is on the U.S. speed stacking team.

All it takes for competitive speed stacking are special plastic cups and incredibly fast hands, and 11-year-old Doug has both.

He’s been stacking for only two years. He says it was a difficult skill to learn. “When I started, for this one, I couldn’t do it in under 30 seconds.” Now he does it in under two seconds!

Who is… Doug Brian?

Doug Brian, 11, is the current world champion sport stacker in the 10 year old division for the cycle and 5th in the 3-6-3. He was recently selected to be a member of USA Sport Stacking team, made up of the top Sport Stackers in the country, which will compete in the 2010 WSSA World Sport Stacking Championships.

Doug is so fast that he was recently invited to join Team USA, which will compete in the 2010 World Sport Stacking Championships. Yep, there really is such a thing, and it’ll be held in Denver in April with more than 700 contestants coming in from all over the world.

“There’s the Philippines, Japan. There was one guy from Norway. There are Canadians, and the Germans are really big in it,” Doug says.

Competitive speed stacking has been around since the mid-1980s. Sport or activity? Call it what you wish, the fact is it’s mesmerizing to watch!

Doug’s dad Jed Brian said, “And he’s a world-class stacker. He is the fastest. Last year he was the fastest 10-year-old. We hope he can defend this year.” 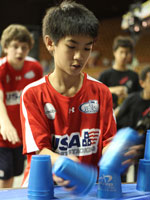 It takes plenty of effort and practice to get good at anything, and Jed says Doug has definitely put in his time! “Summertime, three or four hours a day, and during school, a couple of hours a day,” he says.

In stacking competitions there are individual events and team relays; the age groups go from 4 to 60+ years old. The bottom line, though, is speed. And Doug will keep working to improve his times until the competition in April.

The world speed stacking championships are conducted similar to the Olympics. There’s an opening ceremony and a parade of flags, and the top three trophies are gold, silver and bronze.